A pinch of culture in Phnom Penh

Right upon arrival at Phnom Penh airport we experience a sample of how chaotic things are being run. Everyone needs to obtain a visa on arrival at the Immigration booth, but an orderly queue of people waiting for their turn is out of the question. It is more like everyone for himself. After a visa has been prepared the officials show the photo on the passport and you have to pay 20 $.

No intention to return credit

I only carry 50 $ notes, so I hand over one of those. When it’s my turn, the officer in question does not show any intention to return any credit. Getting upset would be counterproductive, so I wait in front of the desk. After a while, the immigration officer gathers together a note of 10 and 20 $. When I take the 10 $, she tries to put the other bill aside, but I quickly grab that one also. A bit of a worrisome start, I think.

The journey to the center – and the hotel – is about 10 kilometers and takes half an hour. What immediately strikes me on the way is that as in so many Asian cities there are so many motorbikes driving around. But compared to Bangkok, for example, the crowds on the streets in Phnom Penh are much less.

Check-in at the hotel is smooth. It’s a big hotel, around 160 rooms, and when we get to see our room, I immediately realize that this is about the most luxurious place we will occupy this trip. King-size beds, air conditioning, TV, and fridge. Let`s say, a decent start to our Cambodia adventure.

Around 2 o’clock in the afternoon, we decide to start exploring the city and especially pay a visit to the Phnom Penh National Museum for a pinch of culture. Shortly before we leave, I inform my travel companion that we will be approached almost immediately by drivers who want to transport us. And yes, while leaving the hotel reception we are contacted by seven motorbike drivers. It looks like an invasion, understandable in a country under reconstruction and without a social safety net, but we are declining – for today anyway. With some time and a little effort, it is easy to walk on foot here to the city center.

A pinch of culture in Phnom Penh 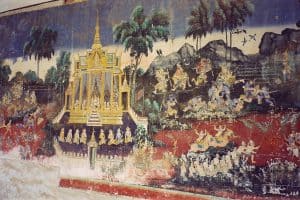 After about 40 minutes we reach the National Museum of Cambodia. There is a collection of sculptures and utensils originating mainly from Angkor Wat; Buddhas, Hindu gods, and more. I think the overview of the museum is worth visiting. In the past, many valuable images were stolen in Angkor Wat and sold abroad by malicious traders. Now the government is trying to stop the robbery of antique pieces and trying to recover other, previously stolen images to preserve the Cambodian cultural heritage.

As we are hungry, we start searching for a backpacker café which is mentioned as a must-visit in our travel guide. We end up being the only two customers. We order a typical Khmer dish, one with fish, and one chicken. Five minutes later, the bartender who took the order gets back to our table with the message that he only has one portion of fish and the rest will have to be chicken. Just what we ordered, so what is the problem?

The dish itself is a bowl of watery curry with peppers, supplemented with a ball of rice. It’s okay, although later on, I do get stomach issues. There is also one red pimento in our dish. Wisely I don`t digest it, my companion, on the other hand, does eat it. Less than a minute later, he bursts into coughing and turns red like the spice itself.

After our dinner, we want to have a look at the Psar Thmei central market, but that does not turn out to be a lively place at night. So we decide to return to the hotel, we both long for a refreshing shower. At the entrance, there are still some drivers waiting, the same ones as this afternoon. They want to know if we will acquire their services tomorrow and if so, at what time.

Some malfunctions in the room

Back in the room, half of the lights do not work. Also, the air conditioning no longer functions, while it did this afternoon. No reason to make a fuss, we enjoy a good shower and are keen to go to sleep. While smoking a last cigarette in the hallway, through the window, I notice two drivers sleeping on their motorbike. I feel pity for them.