By Meanwhile in Thailand on September 25, 2018No Comments

Of all the places that I have visited in Laos, it is definitely Luang Prabang, flanked by the Mekong river, which is my favorite. The city itself has been classified as a World Heritage site because of its ancient temples. But the best thing to do around here is to chill-out. All you need to do is observe the people around you, and you will agree.

Laziness as an attitude

One of the great charms of the people in this country is their unconcealed laziness. In my humble opinion, this is due to the climate. The heat during the day hardly allows you to move your foot. The proof is found by watching the people who are sitting on the street or lying on a mat in a stall, but also by observing the cats and dogs. Nothing more enjoyable than taking it easy. This has nothing to do with apathy; rather it is an attitude.

Breakfast with the Mekong river in sight 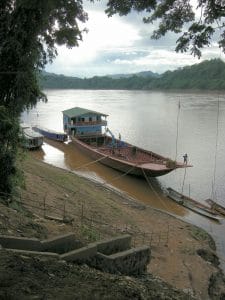 This doesn`t rule out the fact that the sales stalls are staffed from early in the morning until late in the evening. So grabbing a bite is possible at any time of the day. I started the day with breakfast close to the Mekong river. Not that everything runs smoothly though, as my order went wrong. Instead of an omelet, I got served two hard-boiled eggs, but I just can not be bothered. too much.

Abandoned by the internet

When I want to check my e-mails, there seems to be no internet connection in town. Later in the afternoon when I return to the shop, another visitor enters as well and wonders aloud why the internet works here. Apparently, it is still malfunctioning in the other internet cafés. All attendees burst out laughing at his question. For them, this is clearly nothing exceptional.

Wake up in front of the room

The next morning, at 4 o`clock, still drunk from the night before, I wake up on the hard stone floor in front of my room. When I try to stand up, I almost lose my balance. I am forced to put myself on a chair and put my head on the arms on the table. I try to remember what happened. Slowly fragments come back.

Drinking with a fellow compatriot

It all went wrong in a recently opened bar annex resto, where I had stopped by to enjoy a few beers. One of the owners was so delighted to chat with a fellow compatriot here in Luang Prabang. After closing time we continued drinking behind closed doors, exchanging thoughts, accompanied by the necessary Beer Lao’s, some shots of vodka, and rice wine. This lasted until my conversation partner could no longer resist the yearning eyes of his twenty-year-old Laotian bed-mate. Or was it his bare torso when he came back in after having taken a shower?

Climb over the fence to enter my guesthouse

My guesthouse closes at half-past eleven. When you go out, you are supposed to drop the key to your room at the reception, which I did. It must have been around three o’clock when I arrived back at the guesthouse. And there I had to conclude that the front gate had also been closed. In spite of my blessed state, I managed to climb over the fence, unscathed and without damaging the perk, to continue my way to the door of my room.

This night out wasn`t exactly what I had in mind when planning my visit to Luang Prabang. Instead, let the time pass by with the Mekong river in sight, it shouldn`t be more than that.