The cultural highlights of Hue

Annoyed with the money hassling

After breakfast, and before my afternoon flight to visit the cultural highlights of Hue, I take a taxi to the Museum of Ethnology. It was almost inevitable that I paid too much for the ride; the driver did not know the exact location, and furthermore, he hardly understood English. Though the museum here in Hanoi itself is worth visiting, with good explanations of the different ethnic groups that populate Vietnam.

Same story when I drive to the airport

A similar story with the taxi to the airport at 5 pm when I am bound to fly to Hue to see the cultural highlights over there. I settled everything in advance at the hotel, but the driver wants me to pay the airport entrance fee. Nice try, but he gets through – without paying – with his pass. Vietnam is a poor country, after a horrible war, but I am annoyed about the constant money hassling for money in this country. Have I had enough of South-East Asia?

The flight itself runs smoothly, and the taxi to Hue too. My hotel room is basic; maybe I will ask for an upgrade tomorrow. After a lousy dinner, I want to have a drink somewhere in the neighborhood, after all, it is Saturday night. I discover a hard rock music bar, full of teenagers, with a pool billiard in the middle. The contrast between East meets West is appealing, but somehow it also doesn’t fit.

The city of  Hue – many times you will see the name written as Hué – is small enough to explore on your own. Earlier in the evening, the girl at the reception of my hotel spoke to me about some trips they organize. I have my doubts, tomorrow I will probably rent a bike, and I will go exploring Hue Imperial City, also known as The Citadel, on my own. It is time to take matters into my own hands to give this trip a chance to succeed. The mixed feelings about Vietnam remain.

The Nguyen site is one of the cultural highlights of Hue

The next morning I go on foot into the old city center, looking for the Imperial Nguyen site. After finding out that I am walking in the wrong direction, I hire a cyclo driver for one hour. He brings me to a Buddhist temple and the Museum of Royal Fine Arts, before dropping me at the site. Despite the bombing of the Americans, many imperial buildings standing are still intact or were restored in the meantime, so visiting the Nguyen site is worthwhile, and definitely one of the cultural highlights of Hue.

A bar having as much staff as customers

After a shower at the hotel, I want to go outside for dinner, but it is raining heavily, so armed with a rain badge and an umbrella, I sally forth. Later that evening I hop into a bar.  There is as many staff as there are customers. The girls serving drinks act very disinterested but correctly. Gradually tourists seep in. But it seems not possible to start a conversation with any of them, not with the tourists, and neither with the Vietnamese clients. I drink a few beers and then drift back to the hotel.

Visiting the Royal Tombs along the Perfume River

The next day I want to visit the graves of the emperors along the banks of the Perfume River. These are located at a distance of 2 to 16 kilometers from the city center. When I step outside the hotel, a motor driver approaches me. For a small number of dollars, he wants to take me to the tombs. Reasonable price, I think, in all my naivety, even though I should know better by now. He drives me to the Pagoda of Thien Mu, and the Royal Tombs of Tu Duc, Minh Mang, and Khai Dinh. All of these cultural highlights of Hue were all on my planning, so I am delightedly ticking them off my wishlist. 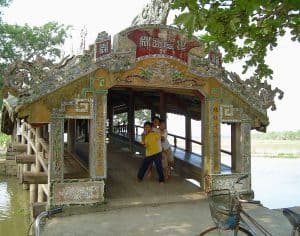 To finish the tour, my driver proposes a ride to the Japanese Bridge, built around 1760. After a drive through the countryside, we arrive. My guide is amusing, understands good English, and drives calmly. But finally, the monkey comes out of the sleeve. Because of the extra distance and so on, he wants extra money from me. I concede partially, and end up paying him something too much to my liking. But I have had it now with those drivers. The next one will have to make unambiguous agreements in advance, or there is no deal at all. Somehow Vietnam is not going well for me, and I am wondering what Danang, my next stop, will bring.